Property investment associations, if you are looking for a really good speaker for your monthly meetings, I can strongly recommend our last one, Andrew Fleming.

The unique thing about Andrew is that he does it all from a wheelchair, on which he has been dependent since a farm quad bike accident on October 5, 2000 left him paralysed from the waist down.

It’s one hell of a story and he tells it exactly like it was and is for him.

But having endured such a horrific event and learned to cope with ongoing pain and all the rest of it, Andrew doesn’t look back. He’s made choices to enrich his life and his challenge is for his audiences to do the same.

The accident happened on his in-laws’ farm at Hawera, when he was working for low wages to help them out. He got flipped over the handlebars and landed on his back on a rut. It was 10.15 am, nobody was likely to come looking for him, rain was possible and he feared he might die of exposure.

“But there is always a choice when you are facing adversity,” he says.

He could hear the bike’s motor still running and managed to roll himself to where he could see it, unfortunately straddling a fence. That hope was dashed but then he realised the neighbour would be coming to get his cows for milking at 3pm. The cows were lined up at the gate but some reason the neighbour was late and Andrew had lain there in agony with blood pooling in his lower legs, for six hours when he finally arrived and spotted him.

In hospital nurses had to do everything for him. He couldn’t even change the tv channel (and that is how come he has titled his book ‘Change the Channel’.

People were telling him: “Focus on the positives.”

“Ha! At 31 I was impotent and incontinent. I freaked out at the realisation I was a married man who couldn’t father a child.”

Not long after he left hospital care his wife announced she was leaving him, just on Christmas too.

He qualified for an ACC benefit but guess what: it was based on the low wages he’d been getting on the farm and ended up at $265 a week. Andrew was a qualified electrician but had not been working his trade.

Lacking capital, he got started in property investment by acquiring the Hawera home jointly owned with his wife, through their matrimonial settlement. He did much of the renovations himself, sanding and painting using long poles to reach high spots.

“I saw buying and renovating property as a way of getting ahead.”

He now owns four rented properties and has had wins and losses (see detailed statistics on these investments below).

He now lives independently, without the nursing care and home help he began with, “but my pain is such that some days are difficult to get through. I cannot work a whole day every day.”

Andrew, who is engaged as a motivational speaker by two major insurance companies, is a strong advocate for personal risk insurance because it helps protect your investments. He is concerned that people in general rate insuring their property as a higher priority than themselves.

“If I’d had a life policy with trauma and disability benefits, my life would have been a lot better.”

One of Andrew’s greatest pleasures is skiing, on a custom-built, sit-down, shock-absorbing single ski device that cost him $10,000. He had just had six weeks skiing in Wanaka when he spoke to the TPIA.

He was named BrightStar Emerging Speaker of the Year (2014) by the National Speakers Association of NZ.

His book Change the Channel can be purchased online by emailing Andrew at andrew@speakerandrewfleming.com 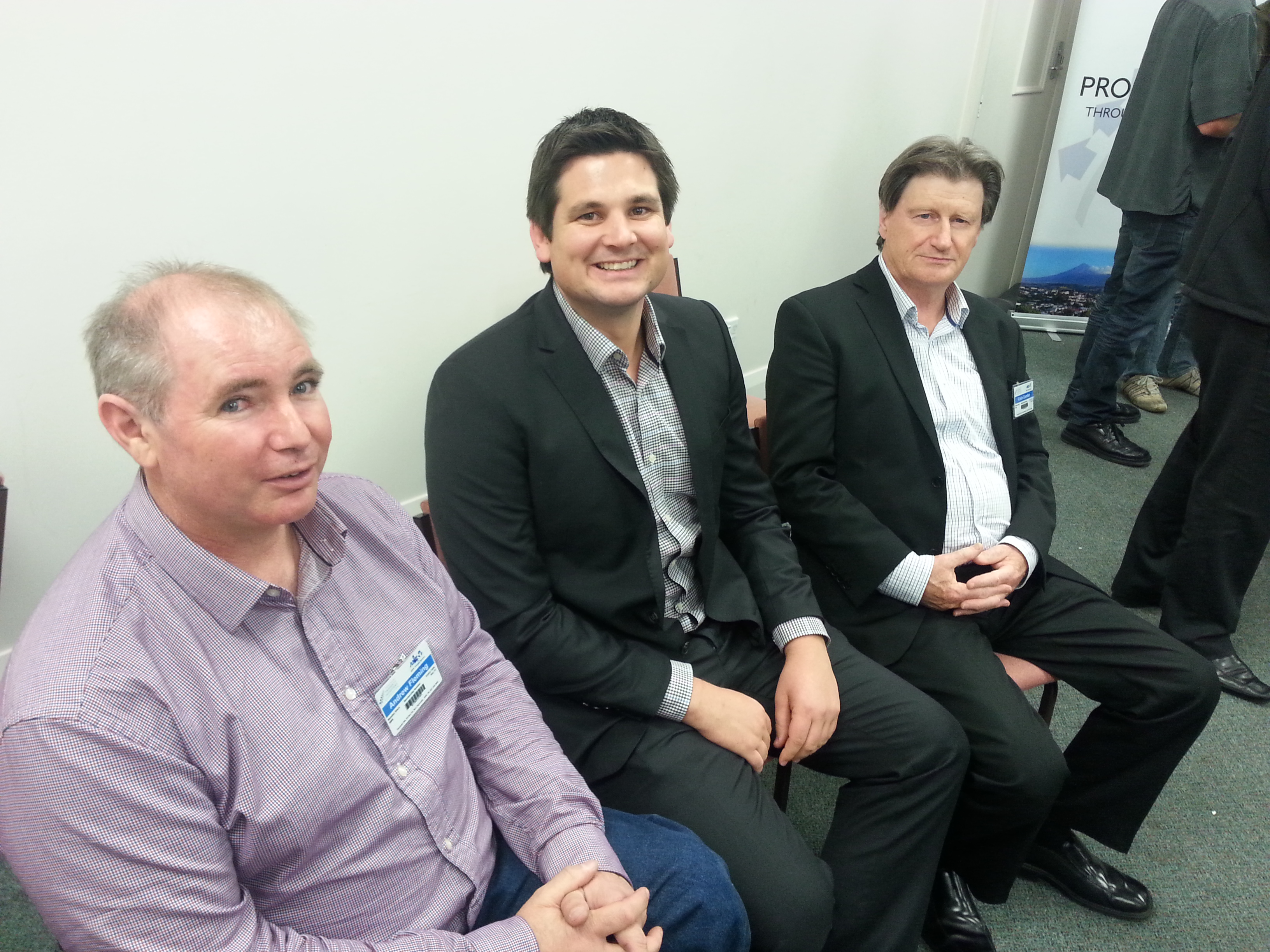 McDonald Real Estate Ltd, a corporate member of the TPIA, was our monthly event sponsor on November 18. Members of the company’s staff and sales teams attended, along with the current general manager Daniel McDonald who outlined the company’s history and aspirations.

The business was started in Stratford in 1912 by Irish immigrant Michael McDonald who posted himself on the footpath outside the Empire Hotel with a notebook in which he took the names of potential buyers and sellers and endeavoured to match them up.

In 1921 he opened an office on Broadway, where the company remains headquartered today.

Michael passed the business to his son Tom in 1946, who passed it to his son the current managing-director Peter in 1976. It remains a genuine locally owned business, which gives back some of its earnings to the community through numerous sponsorships.

The company has seven offices throughout Taranaki, employs 53 staff and 37 licensed salespeople. The New Plymouth office was opened in 2008. “We are getting some traction here now and it is a very exciting area to be operating in,” says Daniel.

McDonalds has been a member of the NZ Realtors Network for 20 years; these are independently owned New Zealand companies who operate their own referral network.

Each McDonalds office has a dedicated rental property manager and their effectiveness is such that currently only 6% of tenants are currently in arrears and none seriously.  It’s an issue if rent is more than 3 days overdue. All contact with landlords and tenants is recorded, and measured as a KPI. Fees are generally 10%.

REINZ statistics for Taranaki show that for the last 12 months total sales (all sources) were 1706, a decrease of 16% on the same period last year, and value was down by 10%.

Daniel said it was hoped an increased in activity this summer would improve those figures.